Film has a quality that is very different to digital. Not better, not worse, just different. And even amongst different films those qualities vary considerably. Digital has revolutionised photography as a popular medium, but the craft still takes time and effort to master. The ability to shoot innumerable frames without having to consider the individual cost of each means that we now have the ability to achieve that mastery without an exorbitant financial outlay, but sometimes slowing down and paying attention to the minutest details in a few frames will help you go further along the road to mastery than shooting hundreds of frames with careless abandon.

Film makes you slow down, consider and mull over what is in front of you. Is it really worth pressing that shutter? There is no delete button here. There is a bin, but somehow throwing a photograph or a negative into a physical bin has much more of an effect on us than the digital trash we hardly even acknowledge. The very act of throwing away something physical that we created makes us think about it, about what went wrong, why it didn't work - and that in itself makes us better.

I'm not one to dwell on EXIF data from other people's images, and hence I don't tend to include shooting details for my digital files up front on this site. However I will add some details for the film galleries, not in the title but in a caption. So that if anyone would like to go through the (useful) exercise of trying to identify the fill just from the 'look', then they can have a little fun doing so. In any case, film information is much more useful from a learning point of view than digital capture data (in my opinion). 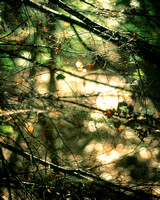