To say the weather has been challenging in Lakeland recently would be an understatement. Nevertheless, I have recognised the simple fact that it would be a crying shame if I didn't make use of the easy access to the Northern fells for the 6 months I am based in Carlisle. So the last few weekends I've made it a point to head out before sunrise (it helps that the sun rises after 8am!) and explore around Derwentwater.

This week has been quite dreary - incessant rain and dull, lifeless skies for the most part. But the forecast this morning was for patchy cloud and perhaps a smattering of sleet. Interesting conditions and some potential for interesting photos. So at 6.45am off I went.

There was some mist when I set out so I instructed Siri to head for Thirlmere, in the hope that misty conditions over the lake with the sun rising over the Helvellyn range would make for some stunning scenery. Unfortunately I was thwarted by road blocks - both the B5322 and the A591 down to Thirlmere were closed. The A591 I knew about - as anyone in Cumbria who hasn't had their head in the sand would - but the B5322 being closed was an annoying surprise.

Plan B then. I had been meaning to scout Walla Crag for a while, so I decided to head over there instead. I was in no rush - the climb up would apparently take about 40 minutes, which meant I would miss sunrise but it wasn't shaping up to be anything spectacular so I didn't mind. I had reverted to scouting mode because the light was not looking promising so I thought this would be a good chance to just explore the way up to the crag and make note of some points of interest.

Having parked at the Great Wood car park I followed the path south and the signs for Ashness bridge but about 100m further down the sign for Walla Crag pointed back to the north-east and read 2 miles. This didn't seem right and a quick look at my trusty OS explorer plate of the area on my phone told me I could continue on the path south and follow Cat Gill up to the crag. It would be a steep but relatively short climb, and easily the quickest route to the top.

(Aside: if you are into exploring outdoors and have a smartphone with a big screen then you should seriously consider the OS Mapfinder app )

I should probably point out here that this climb is not for the faint-hearted. It is quite steep and although short it is a calf and quad burner if taken at any kind of pace. However, if you are used to fell walking then it is a nice short power climb of about 600 feet and then a more leisurely amble to the summit crag. 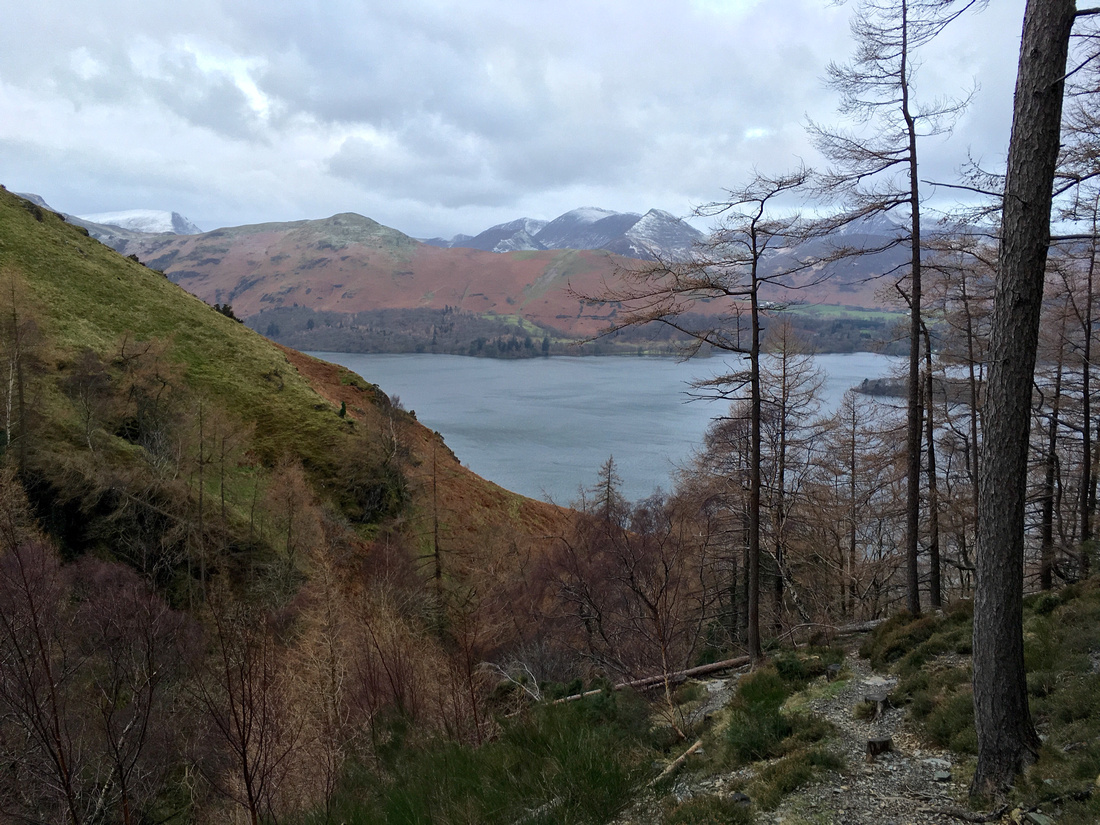 Once at the summit the views are spectacular, taking in Derwentwater below, Bassenthwaite and the Skiddaw massif to the north-west, Blencathra to the north-east and the central fells and Newlands valley to the south and west. 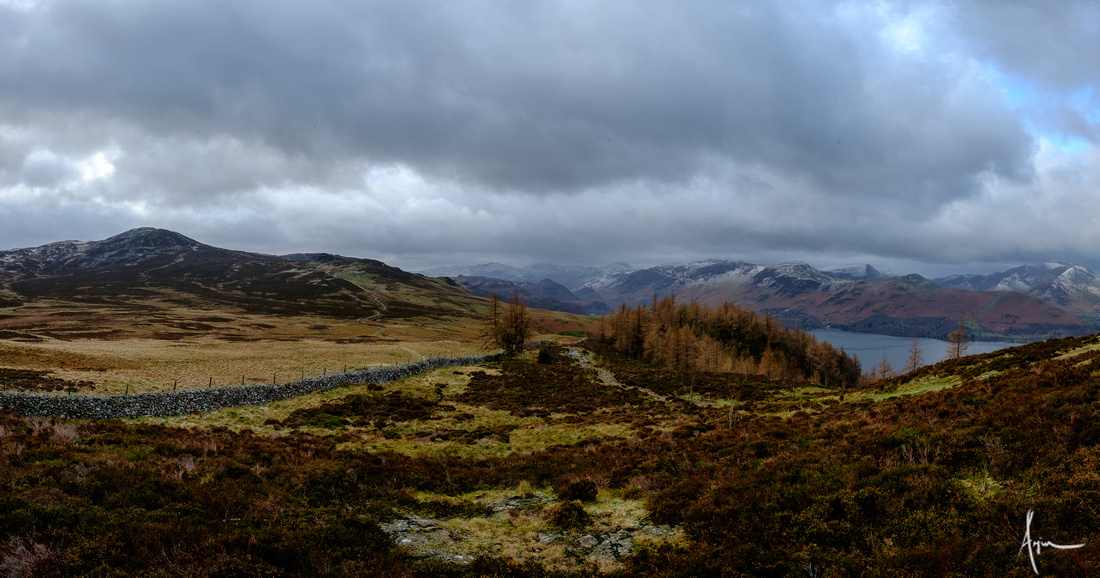 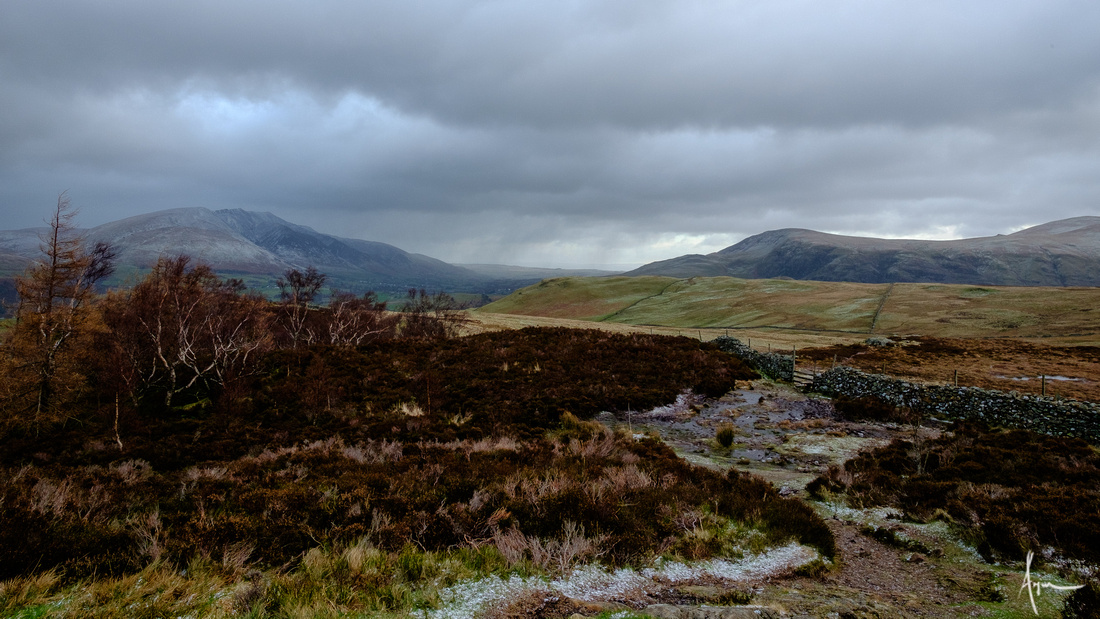 The wind at the summit crag was a gusty 50-60 miles an hour, which meant tripod work was going to be difficult. In any case there was a storm cloud coming in quickly from over the central fells (visible in the first of the above trio of images) and I didn't fancy getting caught in a downpour so I got a few panoramic shots and started to scamper back down the crag.

I only made it a couple of hundred feet when the sleet started to come down! Within 5 minutes it was a full-on sleet shower and I made it across Lady's rake and was about to start descending when I caught a glimpse of a vision that was just too good to pass up... across Derwentwater, visible through a small gap between the trees, Robinson stood out against the surrounding fells glowing ghost-like in the dense sleet-fall. It was a sight to make you stop in your tracks, and I knew it would only last seconds. The sleet was coming down almost horizontally, smattering my face and so I had to take a quick light meter reading with the camera, shield it with my body against the sleet and dial in what I thought would be an appropriate exposure, turn around, compose and fire 3 quick shots before the sleet balls started to coalesce on the lens front element. By the time I wiped them off Robinson had blended back into the surrounding fells and the moment was gone.

It was one of those 'you had to be there' moments. Standing with the sleet-laden wind whipping your face and looking across the grey-blue lake to see the triangular facade of one of the tallest fells in the region lit up like a beacon, immoveable and resolute in the waves of precipitation falling from the sky... it was inspiring. The image can never do it justice, but here it is anyway. 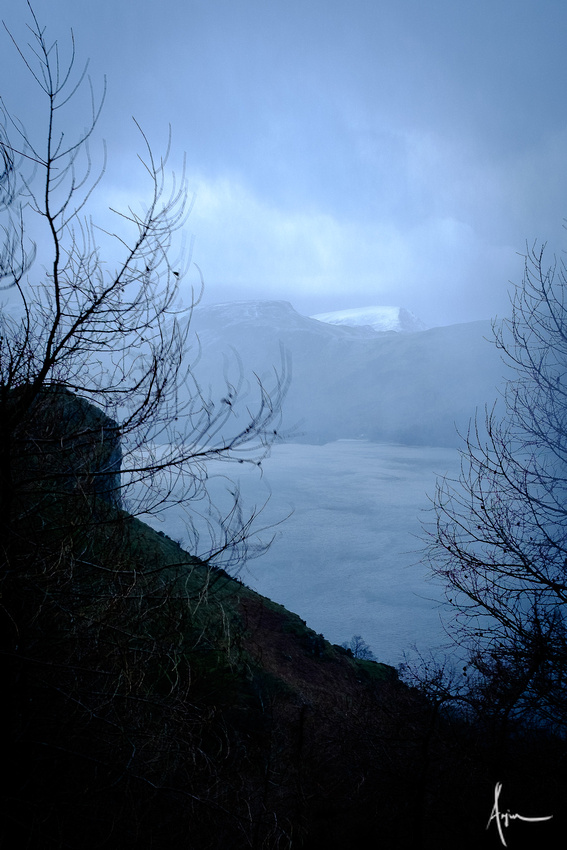 "Fleeting in the sleet"Robinson and Maiden Moor across Derwentwater from Walla Crag, in a sleet storm

A couple of minutes later the sleet had stopped as well. In the space of no time the weather had gone from the above, to... 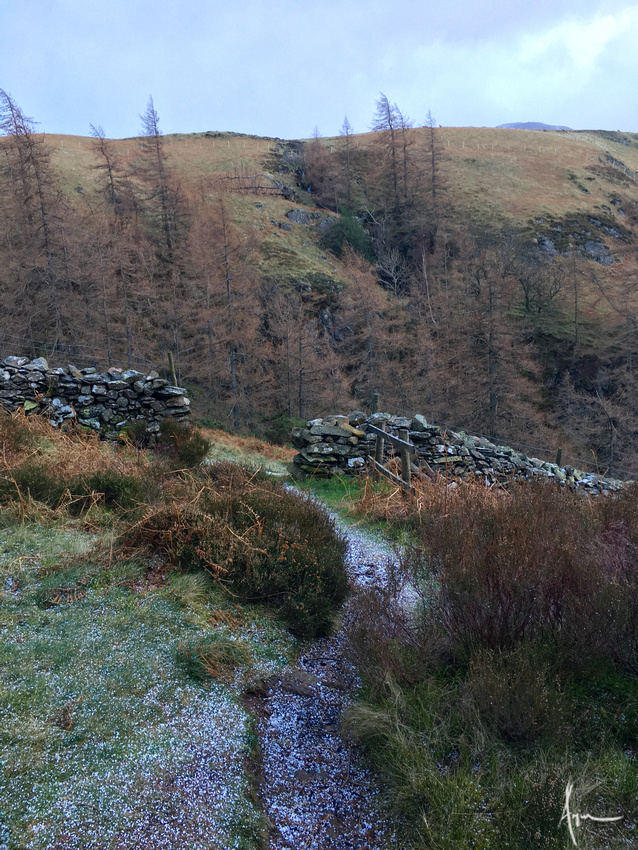 Turning around from the view to Robinson, just a few minutes later!

By the time I reached the car park, the sky looked like this: 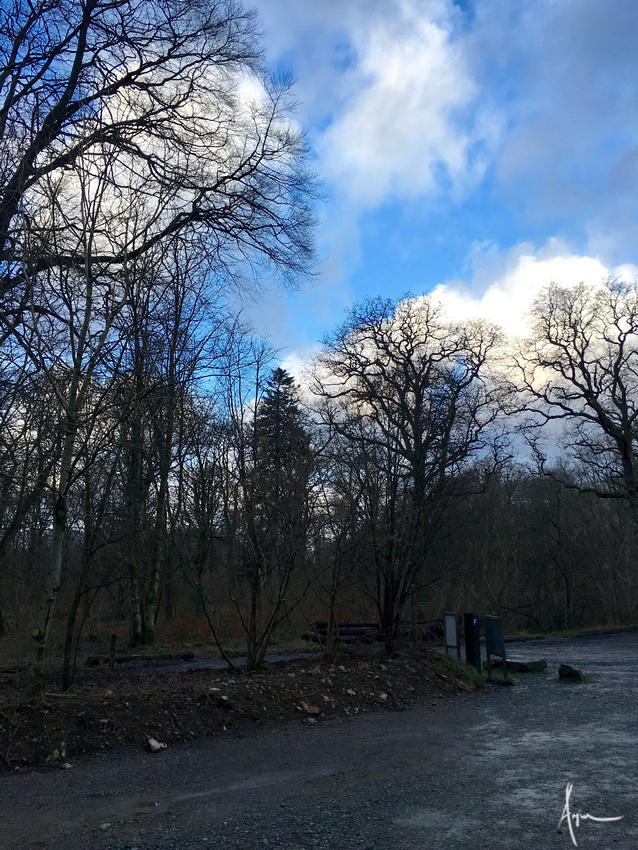 Great Wood car park at the end of the walk

Mother nature can be such a tease sometimes! But I can't complain. What I thought was just going to be a scouting trip ended up producing on of my favourite images - not for it's technical quality, but for the memory it evokes.